Charles-Edouard Renault specializes in media, audiovisual and entertainment law, as both advisor and litigator and is thus continually at the forefront of new developments linked to content and technology in the production sector (website content, film restoration and digitalization, VOD and SVOD etc.), film finance and M&A operation in the entertainment sector as well as in communication crisis (corporate or professional e-reputation protection, follow-up of online audio and video playback content).

As one of the few French arbitrators at the International Film & Television Association (IFTA, Los Angeles) and at WIPO (Geneva) for Film & Media ADR (Alternative Dispute Resolution), Charles-Edouard Renault is very active in entertainment litigation and film production disputes.

He has extensive experience in assisting French motion picture companies as well as financial institutions, and has been involved in the legal aspects of various international film productions, several of which were nominated for the International Cannes Film Festival, the Oscars and the Berlin International Film Festival.

He is co-author of “From Script to Screen – The importance of Rights Documentation in the Distribution of Films” published in January 2012 by OMPI and also regularly publishes articles on legal topics in the French and international markets.

He is an associate professor at Lyon University in media law and gives lectures at the Erich Pommer Institut GmbH für Medienrecht in Berlin, Vienna and Vilnius since 2006. 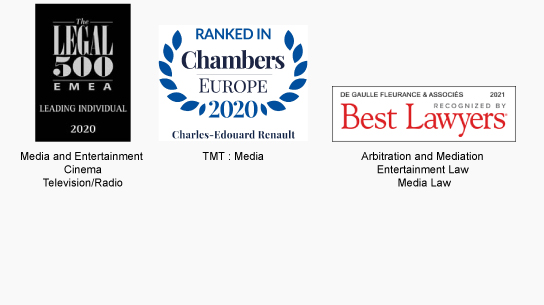 2002 Alumni of the Multimedia Institute