Jean-Marie Job has developed highly specialised expertise in various areas of health and especially in the fields of pharmaceuticals and biotechnology. He is also involved in the creation of IT contracts and issues related to the management of personal and commercial data.

He represents numerous clients before the CNIL (Commission Nationale de l’Informatique et des Libertés). Before joining the law firm of de Gaulle Fleurance & Associés in 2001, he practiced for fifteen years in the legal department of Aventis. Jean-Marie Job is an honorary member of the Association of Pharmaceutical Industry Counsels and regularly lecturers on health law. He is also recognised by the CNIL as a recommended interlocutor.

He lecturers in “data-privacy of personal health data” and “rules and laws governing clinical testing” at Paris-VI University and was nominated by his peers “Lawyer of the Year 2011 in Biotechnology” by the Best Lawyers Awards (In partnership with Les Echos). 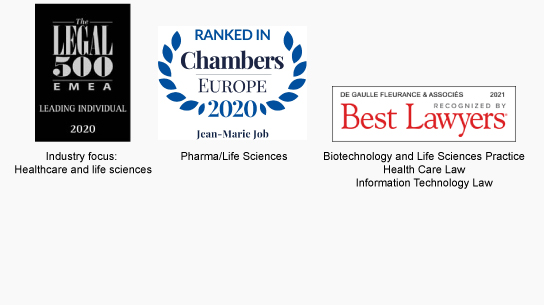 Member of the Paris Bar since 2005

Jean-Marie Job, Cécile Théard-Jallu, « Serialization in Europe: a decisive step about to be taken », PharmaNetwork, October 2015