The De Gaulle Fleurance & Associés team led by Charles-Edouard Renault, Partner, along with Simon Mintz and Victor Fabre, associates, advised No Money Productions – producer of the films “Mammuth”, “Le Grand Soir”, “Near Death Experience” or “Saint Amour” – in the financing and production of the film “I Feel Good” directed by Benoit Delépine and Gustave Kervern, for a budget of 4.4 million euros.

Co-produced by JD Films and Arte France Cinéma, with the support of the Aquitaine Region, and with actors Jean Dujardin and Yolande Moreau, “I Feel Good” was selected out of competition for the 71st edition of the Locarno International Film Festival last August. It is distributed in France by Ad Vitam and sold internationally by Wild Bunch. It will be released on French screens on September 26, 2018.

De Gaulle Fleurance & Associés has developed a strong practice in the field of Media and Entertainment, combining recognized expertise in content financing and literary and artistic property. As such, our teams have worked on more than thirty feature films over the past five years. 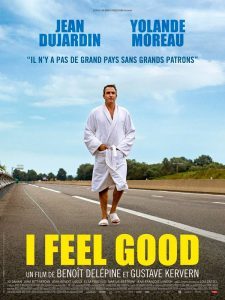