23/02/16
De Gaulle Fleurance & Associés (Charles-Edouard Renault, Partner, and Simon Mintz) advised No Money Productions – who produced films such as “Mammuth”, “Le Grand Soir” ou “Near Death Experience” – in the context of the funding and production of the “Saint Amour” movie directed by Benoit Delépine and Gustave de Kervern, for a total budget amounting to 4 million Euros. “Saint Amour” was coproduced with JPG Films and France 2 Cinéma, starring Gérard Depardieu, Benoit Poelvoorde, Vincent Lacoste, Céline Sallette and Chiara Mastroianni and was chosen out-of-competition for the 66th edition of Berlin International Film Festival, which takes place from 11 to 21 February 2016. It is distributed and sold by Le Pacte and will be released in France on 2 March 2016. De Gaulle Fleurance & Associés has a strong Media & Entertainment practice involving an acknowledged expertise in funding contents and in literary and artistic property. In this respect, De Gaulle Fleurance & Associés provided assistance in the context of about thirty full-length feature films over the past five years. 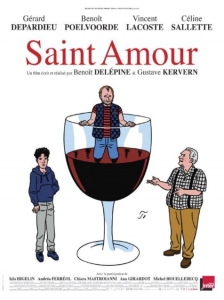